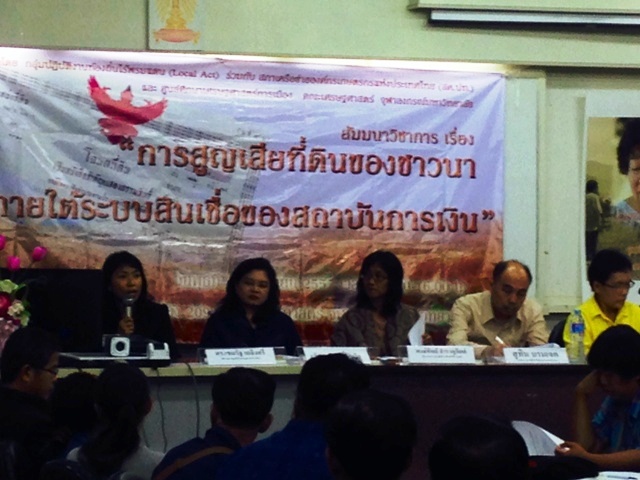 Wฺritten by Bangkok Post  Published: 26 Sep 2014
Writer: Penchan Charoensuthipan
Academics have called on the government to support farmers who are losing their rice fields to lenders.
Farmers frequently post their rice fields as collateral to seek loans to pay for their farming operations and daily expenses, said Khemarat Talerngsri, director of Chulalongkorn University's centre for political economy studies. But if they fail to repay their debt, their land can fall into the hands of financial institutions or land speculators.
Of the country's 149 million rai of farmland, about 30 million rai are mortgaged and 29 million rai are leased, she said, citing figures from the Office of Agricultural Economics.
"Farmers' lands are suitable for rice cultivation to feed people in society, but when the lands are taken away from farmers, they risk being used for other purposes or abandoned for speculation," Mrs Khemarat said, adding most of the farmland now is owned by a small group of people.
Mrs Khemarat was speaking at a seminar on the loss of farmland to banks, organised by the centre for political economy studies and a non-governmental organisation called Local Action Links, at Chulalongkorn University on Wednesday.
Mrs Khemarat said about 80% of farmers are in debt under the formal lending system, and the proportion is on the rise, while lending from informal systems has declined. About 71% of farmers have sought loans from the state-owned Bank for Agriculture and Agricultural Cooperatives (BAAC). Farmers commonly lack knowledge about debt, laws and contracts. When they fail to repay loans, they face steep interest payments.
Despite efforts by several governments to help farmers — such as the formation of the Farmer's Reconstruction and Development Fund, the Revolving Fund for Lending to Farmer and Poor, the debt moratorium scheme and other projects aimed at tackling rural debt — the campaigns came too late for many already buried in debt, she said.
Mrs Khemarat said the government, instead of private lenders, should extend loans to small-scale farmers, as other countries have already done.
"To what extent the government will attach importance to farmland protection for the sake of the nation's food security remains to be seen," she said.
Narong Petprasert, a political science lecturer at Chulalongkorn University, said when farmers get desperate to repay bank loans, they often turn to loan sharks with high interest rates.
The government's agriculture policy, which says it would pay farmers to stop growing rice, is still unclear, Mr Narong said. He believes the country risks its food security if new generations turn away from farming.
Siwanat Worapong, who represents a network of Thai farmers, said most of the members lack the money to run their farms and pay household expenses. In many cases, their land title deeds now belong to banks, she said.
One solution she suggests, backed by Suthin Baromjate of the Lawyers Council of Thailand, is farming collectives, in which multiple families pool their resources.