Since 2010, four people have been killed in a community locked in a battle for the right to use government land

BANGKOK, June 23 (Thomson Reuters Foundation) - Supot Kalasong was driving home one afternoon in April when he heard a bang and assumed he had blown his newly-patched tyre.

Then he heard more bangs and realised gunfire was piercing his pickup truck door, hitting him six times on his right leg and twice on his right arm.

He was lucky, suffering only minor wounds. Since 2010, four people have been killed in Klong Sai Pattana, a small community in southern Surat Thani province, that has been locked in a bloody battle for the right to use government land.

"It is the worst case for land rights defenders - each place has people who are killed, but it's never this bad. And the state is never able to catch the perpetrator and prosecute them," said human rights lawyer Sor.Rattanamanee Polkla, of the Community Resource Centre Foundation.

A court had granted the government legal ownership of the land after a lawsuit over a palm oil company's expired concession. Villagers, who have occupied the land for at least eight years, say they helped the state win its case.

Now, however, the villagers face eviction as officials seek to redistribute the land in a convoluted dispute showing what little power small-scale farmers wield over land, as well as the bloodshed they suffer in defending land rights.

"The villagers sacrificed their blood, bodies and souls - with people losing their lives - to get this land back," said Pongtip Samranjit, director of Local Action Links, a Thai non-profit focusing on farmers' and peasants' rights.

The community blames the violence on mafia linked to the plantations. Over the years, three men were arrested but subsequently released on bail. One of the three was charged with murder but was acquitted in March.

Nobody has yet been convicted for the murders, Songsak Raksaksakul, deputy director of the Justice Ministry's Department of Special Investigation, told the Thomson Reuters Foundation.

Meanwhile, the government agency overseeing land redistribution for farmers is preparing to ask the ruling junta to use article 44 of the interim constitution - dubbed the "dictator's law" by the media - to drive the villagers off the 160-hectare plot.

The villagers and rights activists say they worked closely with the Agricultural Land Reform Office (ALRO) on the case against the company accused of occupying the area illegally.

But despite the court victory in 2014, the ALRO now says the villagers themselves are illegal occupants and must also leave.

"The ALRO is stabbing them in the back and going back on the deal with the villagers," Pongtip said.

"They like to tell the media that they have chased the company out, but the fact is that a court ordered them out. They say they chased the bad people out, and now they should get the land," Sunsern said.

"I said no, that's not how it works. You have to register to be considered, along with other villagers. There are no privileges for these people ... If we can reclaim the land, then we will distribute it, but we have to do it fairly." 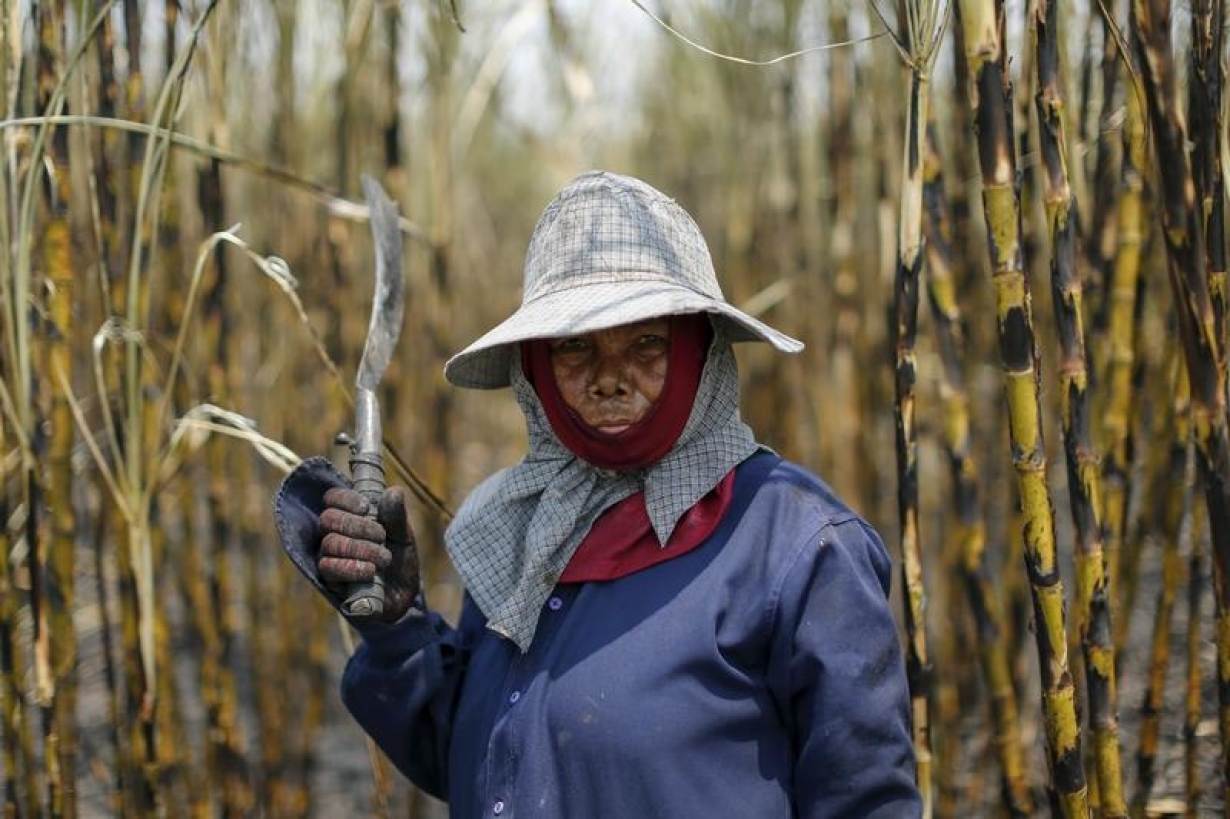 A sugar cane worker poses while working in a field at Pakchong district in Ratchaburi province, Thailand March 22, 2016. REUTERS/Jorge Silva

Agriculture accounts for a tenth of Thailand's economy, with half the country's land used for farming, and more than a third of its workers employed as farmers.

Yet about a quarter of Thailand's 5.9 million farming households do not own land. Many are tenant farmers, mired in debt.

The ALRO, set up in 1975 to acquire land for farmers, has allocated about 5.6 million hectares to nearly 2.2 million people.

Sunsern says the ALRO has another 640,000 hectares it has been unable to distribute because of land conflicts, such as in Klong Sai Pattana.

Frustrated with the snail's pace of reforms, landless farmers from across Thailand banded together in 2008 to form the Southern Peasants Federation of Thailand (SPFT) to fight for a community land title, whereby they would collectively manage and use the ALRO allocated plot.

SPFT members moved into Klong Sai Pattana and worked with the government to become part of a pilot project to secure a community land title.

But first, the government had to oust the palm oil company whose concession had expired and was accused of trespass.

In a 2009 letter to the Surat Thani governor, the ALRO said a committee under the prime minister's office allowed the villagers to temporarily live on the land in Klong Sai Pattana "while the problem is being resolved".

According to Sunsern, the 2014 court verdict against the palm oil company was that resolution.

"The government said they could stay temporarily, until the court decision," he said.

An ALRO list shows nearly 20,000 people have registered for land allocations in Surat Thani province alone, and Sunsern says they all have equal right to vie for Klong Sai Pattana. 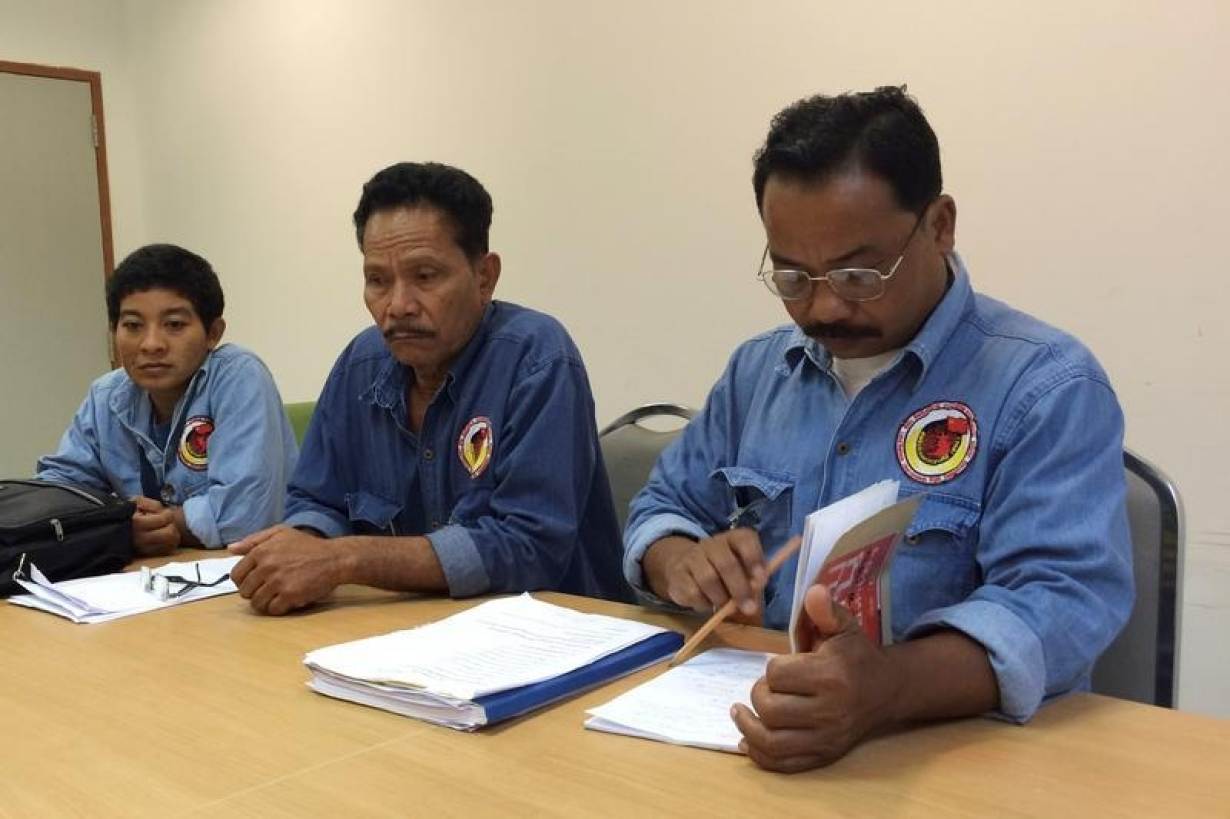 In 2010, Thailand's cabinet passed a law on the issuance of community land titles, which legally allows collective community management and use of state-owned land for their livelihoods.

Villagers and activists say they worked closely with the governments of former prime ministers Abhisit Vejjajiva and Yingluck Shinawatra, and Klong Sai Pattana was slated for the pilot project, but it never got the community land title.

Over the course of Klong Sai Pattana's struggle since 2008, the ruling government changed hands from one party to another, and finally to the military junta after a 2012 coup.

"The government is like this. When the government changes, they don't respect the old memorandums of understanding signed by the previous governments," said Pongtip of Local Action Links.

The committee in the prime minister's office overseeing the Klong Sai Pattana dispute was scheduled to visit the community this month to resolve the issue, but officials declined to be interviewed for this story.

In Klong Sai Pattana, villagers are coming to terms with the possibility of eviction if the ALRO succeeds in getting them kicked off the land.

Despite being shot, Supot, 41, does not see himself moving.

"I can't change my way of life anymore. I've always been a farmer, even my parents were farmers ... and I don't have the knowledge to do anything else," Supot said in an interview at the National Human Rights Commission in northern Bangkok.

"All of us in Klong Sai Pattana - we've always been farmers. And we ask the ALRO, 'Where will you put us, and who will look after all that we've built and planted?'"